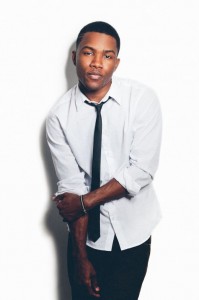 Christopher Francis Ocean (born Christopher Breaux; October 28, 1987), better known by his stage name Frank Ocean, is an American singer and songwriter from New Orleans, Louisiana. Ocean started his career as a ghostwriter for artists such as Brandy, Justin Bieber, and John Legend. In 2010, he became a member of alternative hip hop collective OFWGKTA also known as Odd Future, and his debut mixtape, Nostalgia, Ultra, was released to critical acclaim in 2011. The singles “Novacane” and “Swim Good” both achieved chart success.

In 2012, Ocean finished second place in the BBC’s Sound of 2012 poll. His debut studio album, Channel Orange, was released in July 2012, promoted with three charting singles: “Thinkin Bout You”, “Pyramids”, and “Sweet Life”.

Ocean was born Christopher “Lonny” Breaux on October 28, 1987, in Long Beach, California. When he was around five years old, he and his family moved to New Orleans, Louisiana. He grew up around its local jazz scene and listened to his mother’s CDs on her car stereo, including albums by Celine Dion, Anita Baker, and The Phantom of the Opera soundtrack. As a teenager, he did neighborhood chores and saved up money to rent studio time. As he recalled, “Oh man I had numerous hustles Washing cars was one of them, and mowing lawns and walking dogs.” He enrolled in the University of New Orleans and moved into its dormitory in 2005. Shortly after enrolling in the university, Hurricane Katrina hit New Orleans and he transferred to the University of Louisiana at Lafayette.