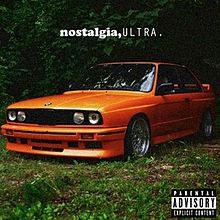 Nostalgia, Ultra (stylized as nostalgia, ULTRA.) is the debut mixtape by American recording artist Frank Ocean, released on February 16, 2011.[2] Ocean was inspired to make the mixtape after Hurricane Katrina in his native New Orleans and his subsequent relocation to Los Angeles. After joining alternative hip hop group Odd Future in 2010, he self-released the mixtape, without initial promotion. Nostalgia, Ultra has a unique R&B aesthetic and features surreal themes and nostalgic lyrics. The songs mostly focus on interpersonal relationships, personal reflection, and social commentary. Following its release, the mixtape received rave reviews from music critics. The cover features a picture of a bright orange 1980s BMW, Ocean’s “dream car”, hidden in plain sight amidst lush greenery.

In May 2011, Def Jam announced its plans to release the mixtape as an EP on July 26, 2011. However, the release of the EP was indefinitely delayed in July 2011 and has since been cancelled. Two singles were released from the aborted EP version: “Novacane,” and “Swim Good”. Both songs received music videos directed by Australian director Nabil Elderkin. Ocean embarked on a solo concert tour through North America and Europe to promote the record, playing a total of 7 shows. In addition, his 2012 performance at the Coachella Music Festival included several live renditions from the release including “Strawberry Swing” and “LoveCrimes”.

The mixtape appeared on several music critics’ and publications’ end-of-year albums lists. Controversy arose in March 2012 over the song “American Wedding”, a remake of the song “Hotel California” by American rock band Eagles. Recording artist Kanye West was reportedly a fan of the mixtape, which led to Ocean appearing on the album Watch the Throne. Subsequently, Ocean collaborated with artists Beyoncé Knowles and Jay-Z after they were introduced to the mixtape through West. Following its release, both Ocean and the mixtape have developed a cult following. The mixtape was followed by the release of Ocean’s debut album Channel Orange to similar critical acclaim in 2012.